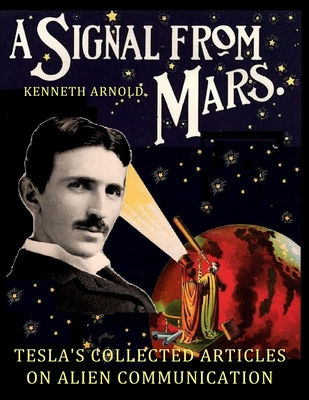 Nikola Tesla (1856-1943) was a Serbian (naturalizedAmerican) physicist and inventor in electrical engineering, famous for his alternating-current motor. His works dealt with the generation and application of electric power. He believed fact that a substantial amounts of power could lead to wireless communication, he proposed a wireless communication by conduction of electricity through natural media.He was persuaded that it was possible to send signals to Mars by means of extremely powerful electrical discharges. His suggestions to contact Mars by these means came after an un expected event that occured one night in 1899, when he was in his laboratory of Colorado Springs.In article: Talking withThe Planets, published in Collier's Weekly, Tesla exposed what he experienced during that night in 1899 while he was improving his machines for the production of intense electrical actions.He discovered mysterious effects that he attributed to signals coming from Mars. Tesla was the first witness to report a close encounter of the first kind with alien communication, which he credited to intelligent beings on planet Mars. From now on, Tesla was a fiercely advocate of alien comunication, and wrote docens of articles on this theme. In this title, we have gathered and assembled a collections of previously published works by Tesla on interplanetary communication. Saucerian Publisher was founded with the mission of promoting books in Ufology, Paranormal, and the Occult. Our vision is to preserve the legacy of literary history by reprint editions of books which have already been exhausted or are difficult to obtain. Our goal is to help readers, educators and researchers by bringing back original publications that are difficult to find at reasonable price, while preserving the legacy of universal knowledge. This book is an authentic reproduction of the original articles printed text in shades of gray. IMPORTANT, despite the fact that we have attempted to accurately maintain the integrity of the original work, the present reproduction has missing and blurred pages, poor pictures from the original scanned copy. Many of the original pages are shadowy, and faint. ILLEGIBLE PAGES HAVE A NOTE. Because this material is culturally important, we have made available as part of our commitment to protect, preserve and promote knowledge in the world. This edition is a collection of material regarding Tesla's life, and his quest for alien communication. This titles has the following parts: 1.Introduction; 2. Nikola Tesla's Photos; 3. Nikola Tesla's Newspaper Articles on Alien Communication. Copy and paste the link for our books: https: //saucerianbooks.blogspot.com/