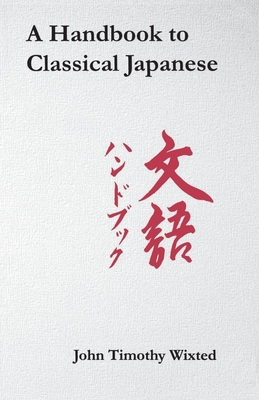 Emerging from materials the author developed while teaching, A Handbook to Classical Japanese draws on twenty-five years of experience in addressing problem areas for those learning the language. The work deals with the central issue of classical language, namely, 'verb'-endings: specifically, the endings of verbs, verbal adjectives, pseudo-adjectives, and verb-suffixes. The Handbook treats the issue systematically, presenting 670 real-language examples, nearly 400 of which are discretely different quotations. The work's extensive Introduction walks the reader through key problem areas, with sections on Which Verbs Belong to Which Conjugation? How to 'Unpack' Bungo Verbs, Nari Headaches, Namu/nan Trouble, Items Easily Confused: Apparent Ambiguity, Respect Language, and the like. The body of the Handbook, with its hundreds of examples, serves as a kind of reader; thirty-two verb-suffixes are illustrated in all of their forms or functions (with at least two examples of each). The book's seven appendices introduce a wide range of Western-language material, including comprehensive information about other translations into English, French, German, and Spanish of all texts cited--especially helpful for potential comparative translation study. For those unfamiliar with the topic, the section on Orthography is a model of clarity. Throughout the Handbook, highlighted items in Japanese are printed in bright red and their romanization in dark-black small capitals, to repeat and reinforce material at both conscious and unconscious levels via complementary graphic features. The volume can be used as an introduction to classical Japanese, an initial textbook, a companion text, a review text, and/or a reference work.

John Timothy Wixted is Professor Emeritus of Asian Languages at Arizona State University, where he taught Chinese and Japanese languages and literatures for more than twenty-five years.