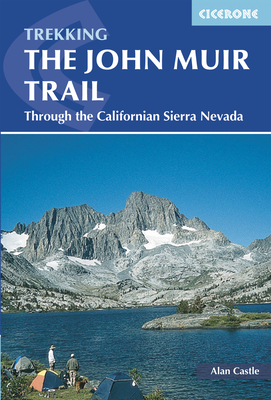 The John Muir Trail (JMT) is one of the world's most spectacular treks and is North America's best known mid-distance walking trail. It runs for 216 miles through the high Sierra Nevada mountains of California, from Yosemite Valley to the summit of Mount Whitney (14,496 ft), the highest peak in the USA outside Alaska. The walking trail, which is named after the great 19th century Scottish naturalist, conservationist and writer John Muir, is entirely through the unspoiled wilderness of the American West and passes through three National Parks, Yosemite, Kings Canyon and Sequoia National Parks. A land of dramatic towering peaks, tranquil mountain lakes, cascading rivers and ancient forests.Despite the fact that the JMT negotiates several mountain passes over 10,000 ft in altitude the trail is well graded and is well within the capabilities of the average hill walker, requiring no scrambling ability. The trail guide divides the route into 21 daily stages, each finishing at a good camping area. The optional detour to climb Half Dome, the jewel in Yosemite's crown, is included.

Alan Castle has trekked and cycled in over 30 countries and five continents and for many years led organized walking holidays in Europe. He has written more than a dozen guidebooks for Cicerone, several on long-distance mountain routes in France and has been exploring the French Massif Central for over 20 years.