A Journey to the Center of the Earth (Paperback) 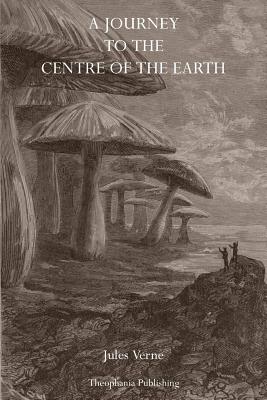 Thank you for checking out this book by Theophania Publishing. We appreciate your business and look forward to serving you soon. We have thousands of titles available, and we invite you to search for us by name, contact us via our website, or download our most recent catalogues. A Journey to the Center of the Earth (French: Voyage au centre de la Terre, also translated under the titles Journey to the Centre of the Earth and A Journey to the Interior of the Earth) is a classic 1864 science fiction novel by Jules Verne. The story involves a German professor who believes there are volcanic tubes going toward the center of the Earth. He, his nephew Axel, and their guide Hans encounter many adventures, including prehistoric animals and natural hazards, eventually coming to the surface again in southern Italy. From a scientific point of view, this story has not aged quite as well as other Verne stories, since most of his ideas about what the interior of the Earth contains have since been soundly refuted. However, a redeeming point to the story is Verne's own belief, told within the novel from the viewpoint of a character, that the inside of the Earth does indeed differ from that which the characters anticipate. One of Verne's main ideas with his stories was also to educate the readers, and by placing the different extinct creatures the characters meet in their correct geological era, he is able to show how the world looked a long time ago, stretching from the ice age to the dinosaurs.