Black and White: How the Left is Destroying the Dream of Martin Luther King, Jr. and our Founding Fathers (Paperback) 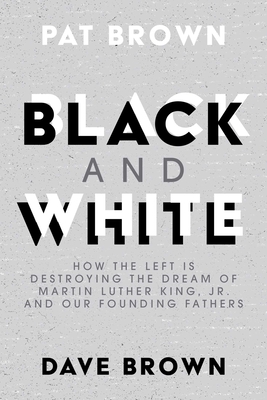 The Left is out to destroy the dream of Martin Luther King, Jr. and it is up to the conservatives of our country—conservatives of all races—to not only understand what is happening, but also stand strong in order to Make America Great Again.

Criminal profiler Pat Brown and her business owner son, Dave Brown, are horrified at what is happening to the legacy of Martin Luther King, Jr. After being refused permission to join Meetup groups in her area because she was not a person of color, Pat, a white woman with a biracial son, created a fake Meetup group. It was called “White Women Yoga” in order to test the new concept that racial segregation is now alright in America and the Civil Rights Act of 1964 is no longer in operation. All hell broke loose; liberals were indignant that a white person would dare have a whites-only group and called her racist, a Nazi, a white supremacist, while at the same time praising black-only groups for having “safe spaces.”

Pat and Dave are mother and son, white and black, and they are dismayed at how our country is going backward in race relations. They believe the Democratic Party and the push for socialism is making this happen. Pat has spent almost twenty years in the media, giving crime commentary on almost every cable news channel on a regular basis, while Dave has always been fascinated with our political and economic systems. When the war against conservatives came into full swing during the Trump administration, when black and white conservatives were being painted as racists and white supremacists, mother and son came together to fight back.

This book is about their journey as people of two different races, and how the great progress made in race relations and black lives is being torn apart by the Left. Conservatives must continue to fight for our country if we are to keep America great and free for people of all races.

Pat Brown is an internationally known criminal profiler who has worked many cases in the US and abroad. She has over 3,000 media appearances on television cable news and radio, having appeared regularly for years on NBC’s Today Show, The Early Show, FOX & Friends, Tucker Carlson Tonight, Nancy Grace, Jane Velez-Mitchell, and The Joy Behar Show. She runs The Pat Brown Criminal Profiling Agency and is working to develop training in profiling for police agencies. She has written six books and developed the first Criminal Profiling Certificate Program in the United States. Always a middle-roader in political matters, she became far more conservative during the Obama years. She supported Donald J. Trump in his presidency and believes that we can Make America Great Again if only we stop dividing the country and painting half of our citizens as racists and bigots. She has a master’s degree from Boston University in Criminal Justice.

Dave Brown has always been interested in politics and economics, studying at the University of Hawaii and the University of Madras in Chennai, India. He received his BA from Thomas Edison State College. He owns his own solar company and works as a project manager in construction. He is biracial with his father hailing from Jamaica. He is a conservative and wants to inspire other blacks and people of color to join in Making America Great Again.