Racing with Aloha: An Inspiring Journey from Humble Barefoot Maui Boy to Champion in the Water (Paperback) 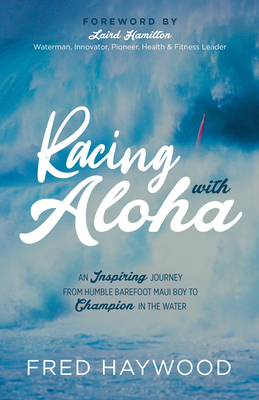 RACING WITH ALOHA is part adventure tale, part spiritual memoir, enchanting anyone who loves the water, who longs for the timeless mystique of the Hawaiian Islands, and who relishes the idea that life can unfold effortlessly and exactly as it should.

No one knows who first put a sail on a surfboard, but everyone would agree that Fred Haywood pioneered the sport of windsurfing. Few know he is also an Olympic contender who swam a record-breaking backstroke alongside his friend Mark Spitz. Before he discovered speed sailing, he surfed with the likes of Gerry Lopez, exploring exotic undiscovered surf spots around the world. Only his friends know how growing up on the island of Maui influenced him to carry his success with humility and generosity, stressing camaraderie over competition and preferring fun over fanfare.

RACING WITH ALOHA weaves throughout the inspiration Fred Haywood's dad instilled in him, which blended a pervasive commitment to accomplishment with a liberating attitude that all is well, all the time. Fred embodied his father's lessons to become a professionally successful, easygoing, sincerely humble man who is respected and beloved by all--friends and competitors alike.

RACING WITH ALOHA is a delightful story that will enchant anyone who loves or longs for the timeless mystique of the Hawaiian Islands. Young readers will delight in the story of a youth who swam with sharks--by accident, of course--and who was as surprised as his coach and teammates to find himself featured in Sports Illustrated magazine. Water aficionados will long for the days of surfing undiscovered beaches. And the countless windsurfing enthusiasts who trekked to Maui in the 1980s, following in Fred's wake, will relish the memories he shares of windsurfing Ho'okipa, the legendary beach still boasting some of the biggest waves in the world.