Reasonable Doubt: A Case for LGBTQ Inclusion in the Institutions of Marriage and Church (Paperback) 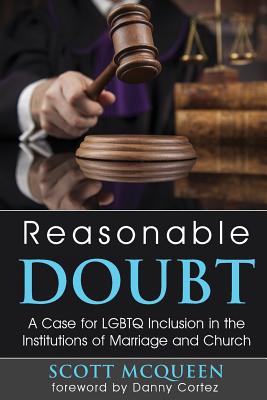 It was the proverbial "Shot heard around the world " On April 8, 2014, Scott McQueen, a Southern Baptist pastor of 31 years, along with his family, met their greatest challenge when their youngest child publically admitted that he was gay. What complicated the scenario was that Scott and his wife, Jackie, had been expecting it; waiting for it; dreading it. Strangely, neither were surprised by the news. They were saddened. They were worried for their son. They were worried about their family. They were worried about their church family. But surprised? No. While it was something no one in the family ever dared discuss, everyone knew deep down in their hearts that Addison was gay. What's more, they had known it since he was a small child.

Their son's proclamation opened a Pandora's Box that could not be closed again. At least, not without answers. Their family's long-held conservative faith was being challenged to the core. Scott began digging deep into the Greek and Hebrew texts, searching those Scripture passages that supposedly condemned all same-sex behavior. Both, he and his wife, began meeting and interviewing countless people from the LGBTQ community, in an attempt to find if there was something important they were missing. And, they were shocked by what they discovered

Scott McQueen has now compiled his findings in Reasonable Doubt: A Case for LGBTQ Inclusion in the Institutions of Marriage and Church. Whether you are a member of the LGBTQ community desiring biblical affirmation, a straight family member of an LGBTQ individual, who is attempting to sort out all the obvious questions or a conservative Christian who has always been taught that same-sex behavior is condemned by God, THIS BOOK IS FOR YOU