Most Wanted Particle: The Inside Story of the Hunt for the Higgs, the Heart of the Future of Physics (Hardcover) 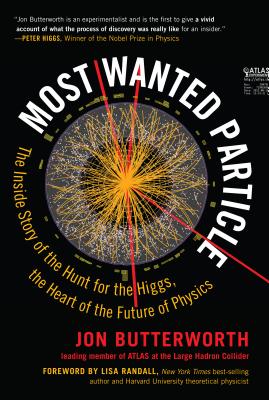 By Jon Butterworth
$24.95
Email or call for price.

The discovery of the Higgs boson has brought us a giant step closer to understanding how our universe works. But before the Higgs was found, its existence was hotly debated. Even Peter Higgs, who first pictured it, did not expect to see proof within his lifetime. The quest to find the Higgs would ultimately require perhaps the most ambitious experiment in human history.

Jon Butterworth was there—a leading physicist on the ATLAS project at the Large Hadron Collider in Geneva, Switzerland. In Most Wanted Particle, he gives us the first insider account of the hunt for the Higgs, and of life at the collider itself—the world’s largest and most powerful particle accelerator, 17 miles long, 20 stories underground, and designed to “replay” the original Big Bang by smashing subatomic particles at nearly the speed of light.

Writing with clarity and humor, Butterworth revels as much in the hard science—which he carefully reconstructs for readers of all levels—as in the messiness, uncertainty, and humanness of science—from the media scrutiny and late-night pub debates, to the false starts and intense pressure to generate results. He captures a moment when an entire field hinged on the proof or disproof of a 50-year-old theory—and even science’s top minds didn’t know what to expect. Finally, he explains why physics will never be the same after our first glimpse of the elusive Higgs—and where it will go from here.

Jon Butterworth is a professor in the Department of Physics and Astronomy at University College London and a member of the ATLAS collaboration at CERN’s Large Hadron Collider in Geneva, Switzerland. He writes the Life and Physics blog for the Guardian, has written articles for a range of publications including the BBC and New Scientist, and is also the author of Most Wanted Particle, shortlisted for Book of the Year by Physics World. He was awarded the Chadwick Medal of the Institute of Physics in 2013 for his pioneering experimental and phenomenological work in high-energy particle physics. For the last fifteen years, he has divided his time between London and Geneva.

“Butterworth ranges far beyond billiards to find ordinary-world comparisons that clarify abstruse scientific concepts. . . . Still, despite all of his colorful simplifying metaphors, Butterworth challenges his readers with real high-level science, taking them deep enough into the Standard Model of theoretical subatomic physics to explain why researchers around the globe monitor the reports from Europe’s Large Hadron Collider with anxious expectation—their most fundamental assumptions about the universe hanging in the balance.”—Booklist, starred review

“The author’s real achievement is in making experimental topics such as jet algorithms, cross-sections, calorimeters, and standard deviation interesting and even exciting. [Butterworth] also does an excellent job of portraying the culture of particle physics and the life of a researcher in the field. . . . Highly recommended. Lower-division undergraduates and above.”—Choice

“Most of the existing popular accounts of the events leading up to the July 2012 discovery claim at CERN are written from a theoretical perspective by outsiders. Jon Butterworth is an experimentalist and is the first to give a vivid account of what the process of discovery was really like for an insider.”
—Peter Higgs, Winner of the Nobel Prize in Physics

“The story of the search for the Higgs boson is so edge-of-your-seat exciting that it practically tells itself—but still, why not get the story from someone who was there for every step along the way? Jon Butterworth is a talented writer and a world expert in the physics, and his book is hard to put down.”
—Sean Carroll, physicist at Caltech and author of The Particle at the End of the Universe

“If you want to know why the discovery of the Higgs boson matters, read this book!”
—Brian Cox, author of Why Does E=mc2?

“A fascinating inside perspective of the discovery of the Higgs boson . . . combined with intimate details about the life of a high-powered physicist and some lovely explanations of the physics.”—New Scientist

“The politics, excitement, and sheer intellectual adventure of discovery . . . from someone who was actually there!”
—Jim Al-Khalili, author of Quantum

“If you met Jon Butterworth in a pub—which, judging from the many anecdotes in Most Wanted Particle, is a non-trivial probability—his is the voice you’d like to hear, this is the tale you’d want him to tell: a breezy recounting of the discovery of the Higgs boson that turns out to be both an accessible primer on particle physics and a lively look at behind-the-scenes Big Science.”
—Richard Panek, author of The 4% Universe: Dark Matter, Dark Energy, and the Race to Discover the Rest of Reality

“Like The Lord of the Rings, Most Wanted Particle takes readers on a long path with many moments of peril and uncertainty to reach the triumphant discovery of the Higgs Boson. It is a great chronicle of a part of the endless chain of progress in science at the LHC.”
—Jim Gates, University System of Maryland Regents Professor of Physics

“An excellent, accessible guide to one of science’s greatest discoveries . . . vivid insights into the doing of science, including the customs of various scientific tribes at CERN.”—Sunday Times

“Unlocks the holy grail of combining entertainment and understanding.” —PFILM

“Riveting! Gonzo journalism but in the entrails of experimental particle physics.”
—Pedro G. Ferreira, author of The Perfect Theory

“[A] charming, enlightening bulletin from one of the most exciting fields of human endeavor.” —Guardian

“If you’re remotely curious about the universe, read this.”
—Steven Thompson of PhysicsSteve.co.uk, a theoretical physics blog