Napoleon's Hemorrhoids: And Other Small Events That Changed History (Hardcover) 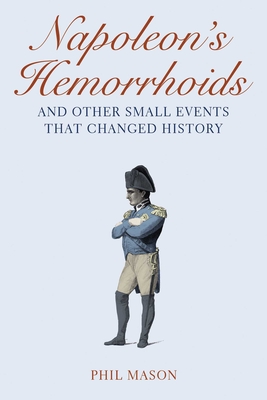 Hilarious, fascinating, and a roller coaster of dizzying, historical what-ifs, Napoleon’s Hemorrhoids is a potpourri for serious historians and casual history buffs. In one of Phil Mason’s many revelations, you’ll learn that Communist jets were two minutes away from opening fire on American planes during the Cuban missile crisis, when they had to turn back as they were running out of fuel. You’ll discover that before the Battle of Waterloo, Napoleon’s painful hemorrhoids prevented him from mounting his horse to survey the battlefield. You’ll learn that an irate blacksmith threw his hammer at a fox and missed, hitting a rock and revealing the largest vein of silver ever discovered, thus changing the finances of Canada forever. Interestingly, Charlton Heston was cast as Moses in The Ten Commandments because his broken nose made him look like Michelangelo’s famous sculpture of Moses. Finally, no one knows Einstein’s last words. They were in German, a language his nurse did not speak.

A treasure trove filled with fascinating anecdotes about the tiny ripples that created big waves in history, Napoleon’s Hemorrhoids is much more than just a trivial fact book; it is an astonishing historical-fate book revealing how our most famous incidents, best-loved works of art, and most accepted historical outcomes are simply twists of fate.

Phil Mason has amassed one of the world’s largest private collections of cuttings and books chronicling bizarre stories. He is the author of Mission Accomplished! and How George Washington Fleeced the Nation. He lives in England.