The Internet is a Playground: Irreverent Correspondences of an Evil Online Genius (Paperback) 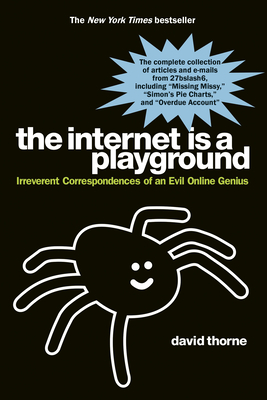 "There is usually a fine line between genius and insanity, but in this case it has become very blurred. Some of the funniest and most clever writing I have read in years." (Terrance Fielding, WIRED magazine)

"I laughed so hard and uncontrollably I could hardly breathe. Reading this on public transport is not a good idea." (Penthouse magazine)

From the notorious Internet troublemaker who brought the world the explosively popular "Next Time I'll Spend the Money on Drugs Instead", in which he attempted to pay his chiropractor with a picture he drew of a spider; "Please Design a Logo for Me. With Pie Charts. For Free," which has been described as one of the most passed-on viral e-mails of all time; and, most recently, the staggeringly popular "Missing Missy", which has appeared everywhere from The Guardian to Jezebel to Andrew Sullivan's The Daily Dish, comes this profoundly funny collection of irreverent Internet mischief and comedy.

Featuring all of Thorne's viral success, including "Missing Missy", The Internet Is a Playground culls together every article and e- mail from Thorne's wildly popular website 27bslash6.com, as well as enough new material, available only in these pages, to keep you laughing-and, indeed, crying-until Thorne's next stroke-of-genius prank. Or hilarious hoax. Or well-publicized almost-stint in jail (really).

David Thorne is the author of The Internet Is a Playground: Irreverent Correspondences of an Evil Online Genius, I’ll Go Home Then, It’s Warm and Has Chairs: The Unpublished Emails, and more.