Mario and the Hole in the Sky: How a Chemist Saved Our Planet (Hardcover) 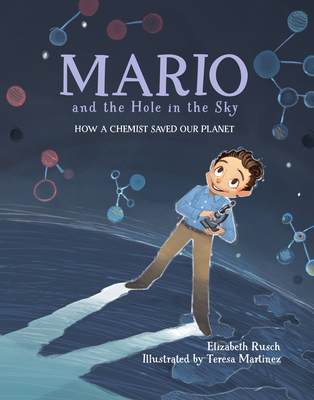 The true story of how a scientist saved the planet from environmental disaster.

Mexican American Mario Molina is a modern-day hero who helped solve the ozone crisis of the 1980s. Growing up in Mexico City, Mario was a curious boy who studied hidden worlds through a microscope. As a young man in California, he discovered that CFCs, used in millions of refrigerators and spray cans, were tearing a hole in the earth's protective ozone layer. Mario knew the world had to be warned--and quickly. Today Mario is a Nobel laureate and a recipient of the Presidential Medal of Freedom. His inspiring story gives hope in the fight against global warming.

Elizabeth Rusch is the author of several award-winning children's nonfiction picture books, including Volcano Rising, Electrical Wizard, and The Music of Life. Her highly acclaimed Scientists in the Field books include the Orbis Pictus Honor book The Mighty Mars Rovers, Eruption!, The Next Wave, and Impact!

When Teresa Martínez was a child, her family moved from a small town to the city. Drawing helped shy Teresa connect with the other kids at school. Now she connects with children across Mexico and around the world through the books she illustrates. www.teresa-mtz.com

♦ "The sky is falling, the sky is falling"—but unlike the supporting cast of "Chicken Little," no one pays attention to Mexican-born chemist Dr. Mario Molina's call to action. Rusch's compelling narrative captures the dread and frustration felt by Molina and fellow University of California-Irvine chemist Sherwood Rowland as they race to head off the depletion of the ozone layer. Excessive amounts of chlorofluorocarbons are being released into the atmosphere from air conditioners, refrigerators, spray cans, etc. at an alarming rate. Their initial, unsuccessful efforts to convince the media and Congress about the serious chemical threat to everyone on this planet parallels Nobel Prize winner Molina's current struggle to address our current crisis of global warming. Martinez's Disney-esque illustrations, set against dark or murky-colored backgrounds, detract only slightly from the strong storyline. A succinct epilogue summarizes Molina's many accomplishments, and a chart comparing the similarities between ozone depletion and global warming is appended. Additionally, a suggested reading list and corresponding links are provided. Unfortunately, the timeline is printed across the endpapers—limiting access to the information once the protective jackets are affixed to school or library copies. A Spanish-language edition will be simultaneously released, with a translation by Carlos E. Calvo. A timely and fascinating look at what courage and focused, informed action can accomplish.
—Kirkus Reviews, starred review

Growing up in Mexico, Mario Molina loved exploring the world around him and performing experiments with his microscope. After attending boarding school in Switzerland and receiving his PhD, Molina began work in the United States, where he made a horrific discovery: CFCs, chemicals used in countless everyday items, were damaging the environment by destroying the ozone layer. Despite Molina and his colleague F. Sherwood Rowland’s attempts to publicize this discovery, they were not taken seriously until scientists discovered a huge hole in the ozone above Antarctica. Finally, Molina and Rowland’s hard work led to almost every country agreeing to stop the production of CFCs. Vibrant, imaginative illustrations convey the possibilities of science and the urgency of Molina’s discoveries and depict Molina’s interest from an early age. Both English and Spanish texts flow smoothly. VERDICT An excellent addition to children’s nonfiction collections, and sure to be a great highlight of Hispanic Heritage Month biography collections.
—School Library Journal