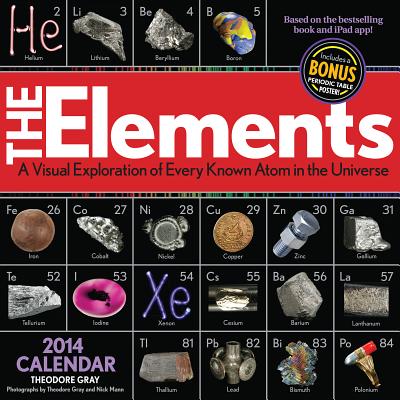 By Theodore Gray, Nick Mann (Photographs by)
$12.99
Email or call for price.

A whole new year of The Elements calendar! A month-by-month tour of the most beautiful and fascinating elements in the periodic table.

Based on the best-selling book The Elements: A Visual Exploration of Every Known Atom in the Universe and the best-selling iPad app, The Elements 2014 calendar is perfect for scientists, students, teachers, and anyone interested in the beauty and diversity of nature. Every month shows a fullpage photograph of a featured element in its pure form and offers an interesting and informative anecdote. Elements for the 2014 calendar include hydrogen, carbon, neon, chlorine, silver, tin, radon, potassium, bromine, promethium, zirconium, and manganese. Smaller images of each element and of compounds are set within the monthly calendar grid, which includes important dates in chemical history and also major North American, British, Canadian, Australian, and New Zealand holidays.

Nick Mann is the photographer of The Elements: A Visual Exploration of Every Known Atom in the Universe. Aside from having photographed more elements and compounds than probably anyone in the world, he is an accomplished landscape, sports, and event photographer. He lives in Urbana, Illinois.