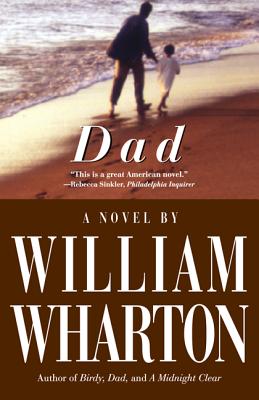 John Tremont, a middle-aged man with a family, is summoned to his mother's bedside after she has suffered a heart attack. When he arrives, he finds her shaken but surviving; it is his father, left alone, who is unable to cope, who begins to fail, to slip away from life. Joined by his nineteen-year-old son, John suddenly becomes enmeshed in the frightening, consuming, endless minutiae of caring for a beloved, dying parent. He also finds himself inescapably confronting his own middle age, jammed between his son's feckless impatience to get on with his life and his father's heartbreaking willingness to let go. A story of the love that binds generations, Dad celebrates the universe of possibilities within every individual life.

A self-described painter who writes, William Wharton is the pen name for the author of two memoirs—Houseboat on the Seine and Ever After—as well as eight novels—Birdy, Dad, A Midnight Clear, Scumbler, Pride, Tidings, Franky Furbo, and Last Lovers. His works have been acclaimed worldwide and have been translated into over fifteen languages.