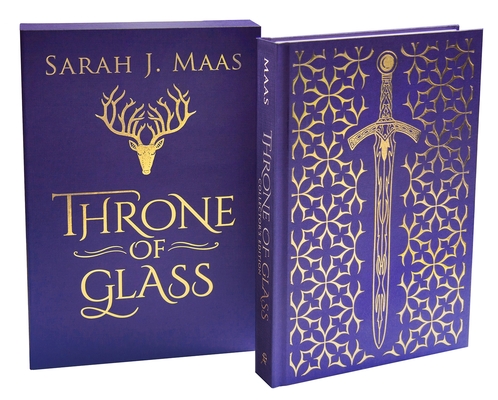 This lush, one-of-a-kind edition of the book that started a world-wide phenomenon tells the sweeping saga of Celaena Sardothien who lives in a land without magic, where the king rules with an iron hand. Celaena is summoned to the castle-not to assassinate the king, but to win her freedom. If she defeats twenty-three killers, thieves, and warriors in a competition, she will be released from prison to serve as the king's champion.
The Crown Prince will befriend her. The Captain of the Guard will protect her. But something evil dwells in the castle of glass-and it's there to kill. When her competitors start dying one by one, Celaena's fight for freedom becomes a fight for survival, and a desperate quest to root out the evil before it destroys her world.
Now available in an all-new, deluxe package, the THRONE OF GLASS COLLECTOR'S EDITION features a cloth slipcase with unique foil art on the case and the book cover, a ribbon pull, beautiful brand-new interior page designs, metallic endpapers, and a new map of Erilea.

Sarah J. Maas is the #1 New York Times and internationally bestselling author of the Throne of Glass, Court of Thorns and Roses, and Crescent City series. Her books have sold millions of copies and are published in thirty-seven languages. Sarah lives with her husband, son, and dog.

“A thrilling read.” —Publishers Weekly on THRONE OF GLASS

“An epic fantasy readers will immerse themselves in and never want to leave.” —Starred Kirkus Reviews on CROWN OF MIDNIGHT

“Simply dazzles. . . . The clamor for a sequel will be deafening.” —Booklist on A COURT OF THORNS AND ROSES

“Fans of Tamora Pierce and George R.R. Martin, pick up this book!” —RT Book Reviews on THRONE OF GLASS

“A thrill ride of epic fantasy proportions.” —USA Today on CROWN OF MIDNIGHT

“With assassinations, betrayal, love and magic, this novel has something to match everyone's interests.” —RT Book Reviews on CROWN OF MIDNIGHT

“Celaena is as much an epic hero as Frodo or Jon Snow!” —New York Times bestselling author on HEIR OF FIRE

“Maas shines as a brilliant storyteller. . . The most exhilarating installment yet.” —RT Book Reviews on HEIR OF FIRE

“Impossible to put down.” —Kirkus Reviews on QUEEN OF SHADOWS

“The progressive khaganate, a multicultural empire modeled after Mongolia, is lavishly and lovingly explored . . . A compelling story of hard-fought growth and redemption.” —Kirkus Reviews on TOWER OF DAWN

“Fans will delight in this gorgeous edition . . . what a ride!” —Booklist on THE ASSASSIN'S BLADE