A Journey to the Centre of the Earth (Paperback) 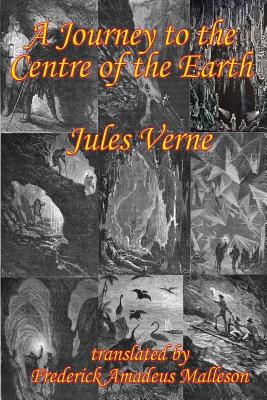 It all began when Professor Otto Liedenbrock discovered a coded message in an old runic manuscript, but it was his nephew, Axel, who deciphered the messages meaning. That's when the race truly started. The message pointed the way to a previously unknown world, one lurking right beneath their feet. And with that brief clue, the hunt was on. Liedenbrock, Otto, and their native guide Hans descend into the depths of the Icelandic volcano Sn fell, in search of adventure and new lands, and find it... in spades Prehistoric monsters, aquatic dangers, strange geology, proto-humans, and the adventures of a lifetime await them as they voyage toward the center of the Earth, and then back up again to escape into the sunlight.

Author Jules Verne (1828-1905) started life as a lawyer, but soon quit the profession to devote himself to writing, to the world's greater benefit. His first produced play, Les Pailles rompues (The Broken Straws), debuted in Paris in 1850, the year before he received his law license. His first published short story, "L'Am rique du Sud. Etudes historiques. Les Premiers Navires de la Marine Mexicaine" ("The First Ships of the Mexican Navy"), was published in Mus e des families in 1851. His first published novel, Cinq semaines en ballon (Five Weeks in a Balloon)--the first of his Voyages Extraordinaires, and the first of more than 50 novels--finally appeared in 1863. Today, Verne is remembered as one of the founders of science fiction, and is one of the most translated authors in the world.

Voyage au centre de la terre, the classic tale of subterranean adventure, was first published in Verne's native French in 1864. This English translation, perhaps the most faithful of the classic translations, was produced by Frederick Amadeus Malleson and published in 1877.

French artist douard Riou (1833-1900) was an artist, engraver, landscape painter, and commemorative artist. He illustrated Walter Scott's Ivanhoe (1880) and Alexandre Dumas' The Count of Monte Cristo (1887), and was a member of the French Legion of Honor. But today he is principally remembered for his association with Jules Verne. He illustrated six of Verne's novels: Five Weeks in a Balloon (1865), The Adventures of Captain Hatteras (1866), Journey to the Center of the Earth (1867), The Children of Captain Grant (1868), Twenty Thousand Leagues Under the Sea (1871), and The Survivors of the Chancellor (1875). The nine images on the front of the book are taken from his original illustrations for this novel.