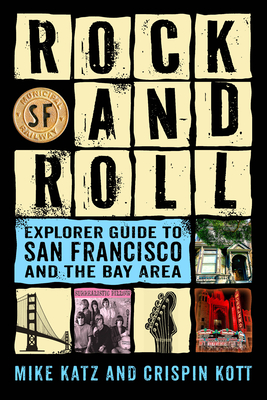 San Francisco's rich and unique cultural history since its time as a gold rush frontier town has long made it a bastion of forward thinking and freedom of expression. It makes perfect sense, then, that both it and the surrounding Bay Area should prove to be a crucible for some of the most enduring and influential music of the rock and roll era. From the heady days of Haight-Ashbury in the '60s to today, San Francisco and the Bay Area have provided a distinctive soundtrack to the American experience that has often been confrontational, controversial, enlightening, and always entertaining. Perhaps best known for the '60s psychedelic scene which included the Grateful Dead, Jefferson Airplane, Creedence Clearwater Revival, Santana, the Steve Miller Band, Sly & the Family Stone, and Janis Joplin, the Bay Area's rock and roll history twists and turns like Lombard Street itself. The first wave San Francisco punks wrought the Avengers and Dead Kennedys; punk later gripped the East Bay, giving us Green Day and Rancid. From the folk and blues eras through the chart-topping sounds of Journey and Huey Lewis & the News. The rock equivalent of Manifest Destiny carried wave upon wave of young musicians in search of fame, fortune and the great lost chord to Golden Gate City. San Francisco and the surrounding Bay Area have collectively produced countless key figures in rock and roll, from musicians to journalists to entrepreneurs. The modern concept of the vast outdoor rock festival took root in and around San Francisco. The Bay Area is also where music history happened to artists from almost everywhere else: San Francisco is where the Beatles played their final concert and the Sex Pistols fell apart; where the Clash recorded much of their second album; where a drug-addled Keith Moon passed out during a concert by the Who only to be replaced behind the drum kit by an eager fan. Rock and roll is baked into the Bay Area's culture and story to this day. A guide to the places that shaped the local scene and world-famous sound, the Rock and Roll Explorer Guide to San Francisco and the Bay Area will take you to where music makers lived, rocked, performed, recorded, met, broke up, and much, much more.

Mike Katz was born in Atlanta, came of age in New Orleans, and eventually made his home in New York City. He is an obsessive music history enthusiast, voracious reader, veteran bookseller, photographer, and the father of Alison, who is (naturally) a medieval scholar. He currently splits time between New York and Monterey, CA. Crispin Kott was born in Chicago, raised in New York, and has called everywhere from San Francisco to Los Angeles to Atlanta home. An avid music enthusiast and failed drummer, he's written for numerous print and online publications, and has shared with his son Ian and daughter Marguerite a love of reading, writing, and record collecting. As a longtime Brooklyn resident and recent returnee to the Bay Area, Crispin has been able to indulge in his love of Rock & Roll of the past, present, and future. Mike Katz and Crispin Kott also co-authored Rock and Roll Explorer Guide to New York City (Globe Pequot, June 2018) and Little Book of Rock and Roll Wisdom (Lyons Press, October 2018).