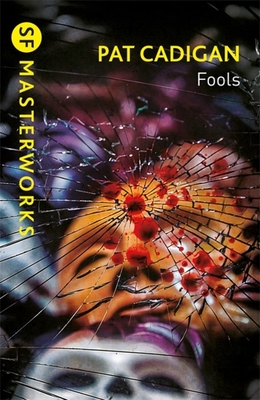 Warning: Personalities for Sale. All the World's a role. In a world of brainsuckers and bodysnatchers, you can't take anything for granted. Not even your own identity. When Marva, a struggling Method actress, wakes up in a hologram pool in an exclusive priv club with fancy new clothes and plenty of money, she knows something is strange. When a memory of a murder starts tugging at her, she knows something is very strange, and that she'd better find out whose life she's living. Fast. Pursued by assassins from a mysterious Escort Service and renegade mind-pirates of every description, Marva must venture into the seamy Downs to find out who wrote the script of the most difficult role of her career. Winner of the Arthur C. Clarke Award for best novel, 1995

Pat Cadigan (1953 -)Pat Cadigan was born in Schenectady, NY, and grew up in Fitchburg, MA. Attending the University of Massachusetts on a scholarship, she eventually transferred to the University of Kansas where she received her degree. Since embarking on her career as a fiction writer in 1987, her Hugo and Nebula Award-nominated short stories have appeared in such magazines as Omni, The Magazine of Fantasy and Science Fiction, and Asimov's Science Fiction Magazine as well as numerous anthologies. Her first collection, Patterns, was honoured the Locus Award in 1990, and she won the Arthur C. Clarke Award in 1992 and 1995 for her novels Synners and Fools. Pat Cadigan moved to the UK in 1996 and now lives in London.