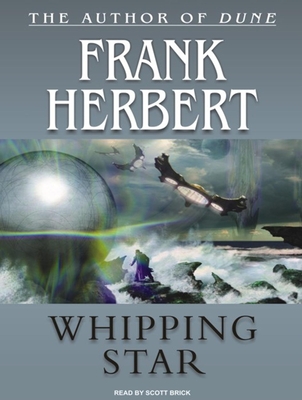 By Frank Herbert, Scott Brick (Narrated by)
Email or call for price
Out of Print

In the far future, humankind has made contact with numerous other species-Gowachin, Laclac, Wreaves, Pan Spechi, Taprisiots, and Caleban (among others)-and has helped to form the ConSentiency to govern between the species. After suffering under a tyrannous pure democracy that had the power to create laws so fast that no thought could be given to the effects, the sentients of the galaxy found a need for the Bureau of Sabotage (BuSab) to slow the wheels of government, thereby preventing it from legislating recklessly. In Whipping Star, Jorj X. McKie, a "Saboteur Extraordinary," is a born troublemaker who has naturally become one of BuSab's best agents. As the novel opens, it is revealed that Calebans, who are beings visible to other sentient species as stars, have been disappearing one by one. Each disappearance is accompanied by millions of sentient deaths and instances of incurable insanity. Ninety years prior to the setting of Whipping Star, the Calebans appeared and offered jump-doors to the collective species, allowing sentients to travel instantly to any point in the universe. Gratefully accepting, the sentiency didn't question the consequences. Now Mliss Abnethe, a psychotic human female with immense power and wealth, has bound a Caleban in a contract that allows the Caleban to be whipped to death; when the Caleban dies, everyone who has ever used a jump-door (which is almost every adult in the sentient world and many of the young) will die as well. The Calebans have attempted to remedy the error, but Mliss Abnethe refuses to cancel the contract, and the Caleban sense of honor makes breaking the contract from their side unthinkable. To save themselves, all the Calebans are handing over the time-like history lines of the sentients who used jump-doors to one Caleban, Fannie Mae, and withdrawing from ConSentiency space. McKie has to find Mliss and stop her before Fannie Mae reaches, in her words, "ultimate discontinuity," but he is constrained by the law protecting private individuals by restricting the ministrations of BuSab to public entities.

Scott Brick has recorded over five hundred audiobooks, has won over forty "AudioFile" Earphones Awards, and has twice received Audie Awards for his work on the Dune series. He has been proclaimed a Golden Voice by "AudioFile" magazine as well as "Publishers Weekly"'s 2007 Narrator of the Year.

"Scott Brick narrates this classic piece of science fiction with his usual excellence. The world of the novel is rich and detailed, and Brick is no stranger to readings of this type." ---AudioFile