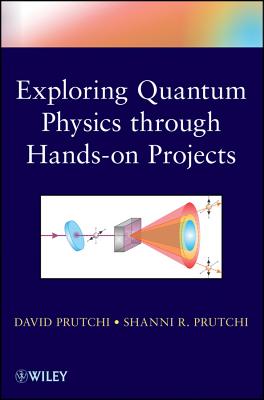 With easy-to-acquire, low-cost materials and basic knowledge of algebra and trigonometry, Exploring Quantum Physics through Hands-on Projects takes readers step by step through the process of re-creating scientific experiments that played an essential role in the creation and development of quantum mechanics.

Presented in near chronological order--from discoveries of the early twentieth century to new material on entanglement--this book includes question- and experiment-filled chapters on:

From simple measurements of Planck's constant to testing violations of Bell's inequalities using entangled photons, Exploring Quantum Physics through Hands-on Projects not only immerses readers in the process of quantum mechanics, it provides insight into the history of the field--how the theories and discoveries apply to our world not only today, but also tomorrow.

By immersing readers in groundbreaking experiments that can be performed at home, school, or in the lab, this first-ever, hands-on book successfully demystifies the world of quantum physics for all who seek to explore it--from science enthusiasts and undergrad physics students to practicing physicists and engineers.

DAVID PRUTCHI, PhD, is Vice President of Engineering at Impulse Dynamics. An adept do-it-yourselfer, he is dedicated to bringing cutting-edge experimental physics within the grasp of fellow science buffs. In addition to being the lead author of Design and Development of Medical Electronic Instrumentation (Wiley), he has published over 30 scientific publications and holds over 70 patents. SHANNI R. PRUTCHI is a high-school junior at Jack M. Barrack Hebrew Academy in Bryn Mawr, Pennsylvania. An avid science and engineering enthusiast, she conducts research with her father in the areas of radio astronomy and quantum physics.