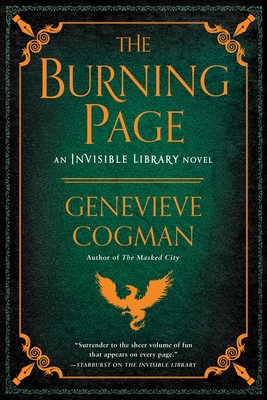 This is book number 3 in the The Invisible Library Novel series.

Librarian spy Irene and her apprentice Kai return for another “tremendously fun, rip-roaring adventure,” (A Fantastical Librarian)—the third in the bibliophilic fantasy series from the author of The Masked City.

Never judge a book by its cover...

Due to her involvement in an unfortunate set of mishaps between the dragons and the Fae, Librarian spy Irene is stuck on probation, doing what should be simple fetch-and-retrieve projects for the mysterious Library. But trouble has a tendency to find both Irene and her apprentice, Kai—a dragon prince—and, before they know it, they are entangled in more danger than they can handle...

Irene’s longtime nemesis, Alberich, has once again been making waves across multiple worlds, and, this time, his goals are much larger than obtaining a single book or wreaking vengeance upon a single Librarian. He aims to destroy the entire Library—and make sure Irene goes down with it.

With so much at stake, Irene will need every tool at her disposal to stay alive. But even as she draws her allies close around her, the greatest danger might be lurking from somewhere close—someone she never expected to betray her...

Genevieve Cogman is a freelance author who has written for several role-playing game companies. She currently works for the National Health Service in England as a clinical classifications specialist. She is the author of the Invisible Library series, including The Mortal Word, The Lost Plot, The Burning Page, The Masked City, and The Invisible Library.

Praise for The Burning Page

“Funny, exciting, and oh-so-inspiring, this is the kind of fantasy novel that will have...readers everywhere gearing up for their own adventure.”—Bustle

Praise for the Invisible Library Novels

“Surrender to the sheer volume of fun that appears on every page.”—Starburst

“A breath of fresh air....A book in which to wallow.”—The Guardian (UK)

“Written in a similar vein to Deborah Harkness’s All Souls trilogy...contemporary meets fairy-tale in this novel.”—The Big Issue