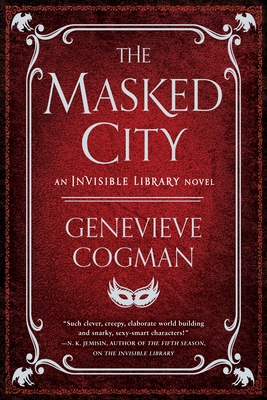 This is book number 2 in the The Invisible Library Novel series.

Librarian-spy Irene and her apprentice Kai are back in the second in this “dazzling”* book-filled fantasy series from the author of The Invisible Library.

The written word is mightier than the sword—most of the time...

Working in an alternate version of Victorian London, Librarian-spy Irene has settled into a routine, collecting important fiction for the mysterious Library and blending in nicely with the local culture. But when her apprentice, Kai—a dragon of royal descent—is kidnapped by the Fae, her carefully crafted undercover operation begins to crumble.

Kai’s abduction could incite a conflict between the forces of chaos and order that would devastate all worlds and all dimensions. To keep humanity from getting caught in the crossfire, Irene will have to team up with a local Fae leader to travel deep into a version of Venice filled with dark magic, strange coincidences, and a perpetual celebration of Carnival—and save her friend before he becomes the first casualty of a catastrophic war.

But navigating the tumultuous landscape of Fae politics will take more than Irene’s book-smarts and fast-talking—to ward off Armageddon, she might have to sacrifice everything she holds dear....

Genevieve Cogman is a freelance author who has written for several role-playing game companies. She currently works for the National Health Service in England as a clinical classifications specialist. She is the author of the Invisible Library series, including The Mortal Word, The Lost Plot, The Burning Page, The Masked City, and The Invisible Library.

Praise for the Invisible Library Novels

“A book in which to wallow.”—The Guardian (UK)

“Ms. Cogman has opened a new pathway into our vast heritage of imagined wonderlands. And yet, as her story reminds us, we yearn for still more.”—The Wall Street Journal

“Funny, exciting, and oh-so-inspiring, this is the kind of fantasy novel that will have female readers everywhere gearing up for their own adventure.”—Bustle