One Hundred Frogs: From Renga to Haiku to English (Paperback) 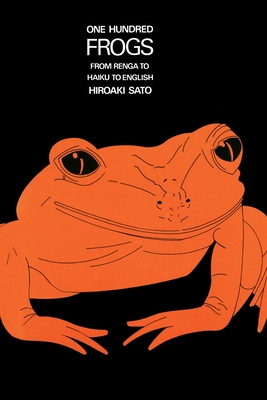 No other Asian poetic form has so intrigued and beguiled the English-speaking world as the Japanese haiku. Even before World War I such imagist poets as Ezra Pound, Amy Lowell, and John Gould Fletcher were experimenting with the form. At that time, Pound well described the haiku as "an intellectual and emotional complex in an instant of time." Indeed, it is the haiku's  sense of immediacy and its precision that continue to appeal to poets and poetry lovers today.

In recent decades there has been an upsurge of interest in the haiku, leading to a number of critical studies of the form, studies that have now culminated in the present book. This insightful work not only considers the haiku itself but also the extremely important yet often ignored renga or linked-verse form, out of which the haiku grew. No deep understanding of the haiku is possible without familiarity with the renga.

One Hundred Frogs begins with a detailed history and description of the renga and haiku. Many renowned Japanese poets, most notably Basho, are represented in the wealth of translated poetry that illustrates the text. To bring this history up to date, a discussion of modern Japanese and Western haiku is included.

Next, the author discusses the craft of translating renga and haiku and explores recent developments in the two forms, offering a representative selection of modern works. To reveal the myriad choices open to translators of renga and haiku, the author provides an in-depth analysis of one of Japan's most famous haiku, Basho's poem about a frog in a pond, and presents a compilation of over one hundred translations and variations of the poem.

The book closes with short anthologies of English-language renga and haiku by contemporary Western poets that offer a tantalizing glimpse of the diversity of expression possible with these two forms.

Hiroaki Sato has translated numerous collections of the works of Japanese poets including, with Burton Watson, the distinguished anthology of Japanese poetry From the Country of Eight Islands, for which the two translators were awarded the 1982 P.E.N. Translation Prize. Also an accomplished poet in his own right, Mr. Sato served as president of the Haiku Society of America from 1979 to 1981. He was educated in Kyoto and, since 1968, has lived in New York, where he is an associate director of the Japan Trade Center.