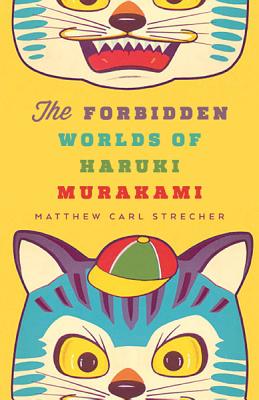 By Matthew Carl Strecher
$22.95
Email or call for price.

In an “other world” composed of language—it could be a fathomless Martian well, a labyrinthine hotel or forest—a narrative unfolds, and with it the experiences, memories, and dreams that constitute reality for Haruki Murakami’s characters and readers alike. Memories and dreams in turn conjure their magical counterparts—people without names or pasts, fantastic animals, half-animals, and talking machines that traverse the dark psychic underworld of this writer’s extraordinary fiction.

Fervently acclaimed worldwide, Murakami’s wildly imaginative work in many ways remains a mystery, its worlds within worlds uncharted territory. Finally in this book readers will find a map to the strange realm that grounds virtually every aspect of Murakami’s writing. A journey through the enigmatic and baffling innermost mind, a metaphysical dimension where Murakami’s most bizarre scenes and characters lurk, The Forbidden Worlds of Haruki Murakami exposes the psychological and mythological underpinnings of this other world. Matthew Carl Strecher shows how these considerations color Murakami’s depictions of the individual and collective soul, which constantly shift between the tangible and intangible but in this literary landscape are undeniably real.

Through these otherworldly depths The Forbidden Worlds of Haruki Murakami also charts the writer’s vivid “inner world,” whether unconscious or underworld (what some Japanese critics call achiragawa, or “over there”), and its connectivity to language. Strecher covers all of Murakami’s work—including his efforts as a literary journalist—and concludes with the first full-length close reading of the writer’s newest novel, Colorless Tsukuru Tazaki and His Years of Pilgrimage.

Matthew Carl Strecher is associate professor of Japanese language, literature, and culture at Winona State University. He is the author of Dances with Sheep: The Quest for Identity in the Fiction of Haruki Murakami and Haruki Murakami’s The Wind-Up Bird Chronicle: A Reader’s Guide.

" In a masterful synthesis, Matthew Strecher delves deeply into questions of language, religion, mythology, psychology, and the boundaries between literature and journalism to demonstrate with great clarity and concreteness how Murakami belongs in the company of such writers as Pynchon, Eco, and Rushdie." —Jay Rubin, author of Haruki Murakami and the Music of Words

"Strecher’s latest book is erudite without being overly academic. A lively and engaging read."—The Japan Times

"Strecher neatly maps out the impression the young Murakami made on the hidebound world of Japanese literature and its overarching literary guild, one entrenched by respect, routine, and what literature ought to do."—Pop Matters

"An original and insightful book—a genuine pleasure to read."—H-Net

"Useful for providing frames through which to read Murakami and for a detailed overview of his work."—CHOICE

"This well-researched monograph not only contributes to deepening our understanding of Murakami’s work, but, more importantly, Strecher reaffirms the bottomless possibilities to enjoy reading this author’s stories."—Asian Studies Review

"Like its subject, Strecher’s book does not offer an overall master map to this world but rather presents us with a variety of intriguing ideas to ponder and to provoke us toward our own interpretations of this tantalizing, multifaceted author."—Journal of Japanese Studies