Proof: The Science of Booze (Hardcover) 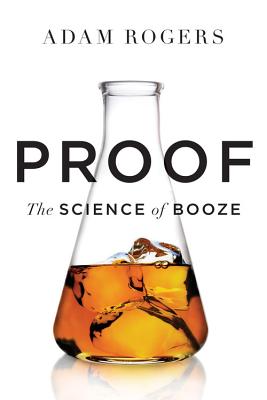 By Adam Rogers
Email or call for price
Out of Print

Named a Best Science Book of 2014 by Amazon, Wired, the Guardian, and NBC
Winner of the 2014 Gourmand Award for Best Spirits Book in the United States

Humans have been perfecting alcohol production for ten thousand years, but scientists are just starting to distill the chemical reactions behind the perfect buzz. In a spirited tour across continents and cultures, Adam Rogers takes us from bourbon country to the world’s top gene-sequencing labs, introducing us to the bars, barflies, and evolving science at the heart of boozy technology. He chases the physics, biology, chemistry, and metallurgy that produce alcohol, and the psychology and neurobiology that make us want it. If you’ve ever wondered how your drink arrived in your glass, or what it will do to you, Proof makes an unparalleled drinking companion.

“Rogers’s book has much the same effect as a good drink. You get a warm sensation, you want to engage with the wider world, and you feel smarter than you probably are. Above all, it makes you understand how deeply human it is to take a drink.” — Wall Street Journal

ADAM ROGERS is the New York Times-bestselling author of Proof: The Science of Booze, which was a finalist for the PEN/E.O. Wilson Literary Science Writing Award and won the IACP Award for Best Wine, Spirits, and Beer Book and the Gourmand Award for Best Spirits Book in the United States. He is a Deputy Editor at Wired, where his feature story “The Angels’ Share” won the 2011 AAAS Kavli Science Journalism Award. Before coming to Wired, he was a Knight Science Journalism Fellow at MIT and a writer covering science and technology for Newsweek.

“One of the best science writers around.” —National Geographic

"Rogers's book has much the same effect as a good drink. You get a warm sensation, you want to engage with the wider world, and you feel smarter than you probably are. Above all, it makes you understand how deeply human it is to take a drink." —Wall Street Journal

“A great read for barflies and know-it-alls—or the grad student who is likely both.” —New York Times’ T Magazine

"In this brisk dive into the history and geekery of our favorite social lubricant, Wired editor Adam Rogers gets under the cap and between the molecules to show what makes our favorite firewaters so irresistible and hard to replicate—and how a good stiff drink often doubles as a miracle of human ingenuity." —Mother Jones

"A comprehensive, funny look at booze...Like the best of its subject matter Proof’s blend of disparate ingredients goes down smooth, and makes you feel like an expert on the topic." —Discover

"A romp through the world of alcohol." —New York Post

"This science-steeped tale of humanity’s 10,000-year love affair with alcohol is an engaging trawl through fermentation, distillation, perception of taste and smell, and the biological responses of humans to booze...Proof is an entertaining, well researched piece of popular-science writing." —Nature

"A whiskey nerd's delight...Full of tasty asides and surprising science, this is entertaining even if you're the type who always drinks what the other guy is having." —Chicago Tribune

“Written in the same approachable yet science-savvy tone of other geeky tomes (think Amy Stewart’s The Drunken Botanist and Brian Greene’s The Fabric of the Cosmos), Rogers’ book sheds light on everything from barrels to bacteria strains.” —Imbibe Magazine

"This paean to booze is a thought-provoking scientific accompaniment to your next cup of good cheer."—The Scientist
"Follow a single, microscopic yeast cell down a rabbit hole, and Alice, aka Adam, will take you on a fascinating romp through the Wonderland of ethyl alcohol, from Nature’s own fermentation to today’s best Scotch whiskies—and worst hangovers. This book is a delightful marriage of scholarship and fun." —Robert L. Wolke, author of What Einstein Kept Under His Hat and What Einstein Told His Cook
"Proof, this irresistible book from Adam Rogers, shines like the deep gold of good whiskey. By which I mean it's smart in its science, fascinating in its complicated and very human history, and entertaining on all counts. And that it will make that drink in your hand a lot more interesting than you expected." —Deborah Blum, author of The Poisoner's Handbook: Murder and the Birth of Forensic Medicine in Jazz Age New York "Absolutely compelling. Proof sits next to Wayne Curtis’ And a Bottle of Rum and Tom Standage’s A History of the World in Six Glasses as a must-read." —Jeffrey Morgenthaler, bar manager at Clyde Common and author of The Bar Book"Proof is science writing at its best—witty, elegant, and abrim with engrossing reporting that takes you to the frontiers of booze, and the people who craft it." —Clive Thompson, author of Smarter Than You Think"Rogers distills history, archaeology, biology, sociology, and physics into something clear and powerful, like spirits themselves." —Jim Meehan, author of The PDT Cocktail Book

"Adam Rogers writes masterfully and gracefully about all the sciences that swirl around spirits, from the biology of a hangover to the paleontology of microbes that transform plant juices into alcohol. A book to be savored and revisited." —Carl Zimmer, author of Parasite Rex and A Planet of Viruses"Reading Proof feels just like you're having a drink with a knowledgeable and enthusiastic friend. Rogers' deep affinity for getting to the bottom of his subject shines through on every page." —Adam Savage, TV host and producer of MythBusters "As a distiller I find most books on booze to be diluted. The science and history here are sure to satisfy the geekiest of drinkers. While the chapters, carried by stories, told through the lens of a rocks glass do not lose the casual. To get this kind of in depth overview of how spirits are produced, consumed and studied you'd have to read 20 books." —Vince Oleson, Head Distiller/Barrel Thief, Widow Jane Distillery

"An entertaining read...Rogers elegantly charges through what took me more than 5 years of research to learn...Proof will inspire and educate the oncoming hordes who intend to make their own booze and tear down the once solid regulatory walls of the reigning royal houses of liquor."
—Dan Garrison, Garrison Brothers Distillery"From the action of the yeast to the blear of the hangover, via the witchery of fermentation, distillation and aging, Wired articles editor Rogers takes readers on a splendid tour of the booze-making process." —Kirkus Reviews, starred"Impressively reported and entertaining...Rogers's cheeky and accessible writing style goes down smoothly, capturing the essence of this enigmatic, ancient social lubricant." —Publishers Weekly