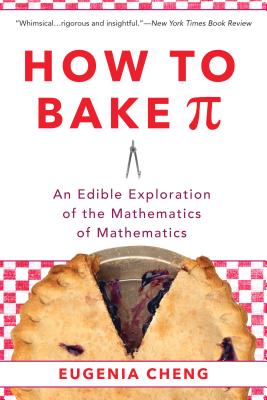 One of the world's most creative mathematicians finds the meaning of mathematics in the kitchen in this "whimsical...rigorous and insightful" (New York Times) book

What is math? How exactly does it work? And what do three siblings trying to share a cake have to do with it? In How to Bake Pi, math professor Eugenia Cheng provides an accessible introduction to the logic and beauty of mathematics, powered, unexpectedly, by insights from the kitchen. We learn how the bechamel in a lasagna can be a lot like the number five, and why making a good custard proves that math is easy but life is hard. At the heart of it all is Cheng's work on category theory, a cutting-edge "mathematics of mathematics," that is about figuring out how math works.

Combined with her infectious enthusiasm for cooking and true zest for life, Cheng's perspective on math is a funny journey through a vast territory no popular book on math has explored before. So, what is math? Let's look for the answer in the kitchen.

Eugenia Cheng is Scientist in Residence at the School of the Art Institute of Chicago and an Honorary Visiting Fellow at City, University of London. She has authored numerous titles, including How to Bake Pi, Beyond Infinity, and x + y. Cheng lives in Chicago, Illinois.

"Cheng never quite overeggs her metaphor of the mathematician as chef...and her tone is clear, clever and friendly. Even at her most whimsical she is rigorous and insightful. Potentially confusing ideas are expressed with a matter-of-fact simplicity.... How to Bake Pi is a welcome addition to the popular-math shelf, unusual not only because of its quirky premise but also because Cheng is a woman, a lucid and nimble expositor, and unashamedly proud of her domestic obsessions.... It would be wonderful if this book attracted a new audience to the field. And there's no better ambassador (or dinner-party host, I'd wager) than Eugenia Cheng."—AlexBellos, New York Times Book Review

"[A]
slyly illuminating dispatch on the deep meaning of mathematics.... Cheng
manages to do for us what the mathematician Keith Devlin has said
mathematicians do for themselves: she compels us to see numbers and symbols as
vivid characters in an ongoing drama, a narrative in which we are alternately
observers and participants."—NatalieAngier, The American Scholar

"[O]ften entertaining...frequently illuminating.... [How to Bake Pi] offers enough nourishment for the brain to chew on for a long time."—ColumbusDispatch

"Invoking
plenty of examples from cooking and baking, as well as other everyday-life
situations such as calculating a taxi fare, searching for love through online
dating services and training for a marathon, [Cheng] explains abstract
mathematical ideas--including topology and logic--in understandable ways....
Her lively, accessible book demonstrates how important and intriguing such a
pursuit can be."—ScientificAmerican

"[Cheng's] book, a very gentle introduction to the main ideas of mathematics in general and category theory in particular, exudes enthusiasm for mathematics, teaching, and creative recipes. Category theory is dangerously abstract, but Cheng's writing is down-to-earth and friendly. She's the kind of person you'd want to talk to at a party, whether about math, food, music, or just the weather.... Cheng's cheerful, accessible writing and colorful examples make How to Bake Pi an entertaining introduction to the fundamentals of abstract mathematical thinking."—Evelyn Lamb, Scientific American's Rootsof Unity blog

"Combined with infectious enthusiasm for cooking and a zest for life, Cheng's perspective on math becomes this singular book: a funny, lively, and clear journey no popular book on math has explored before. How to Bake Pi...will dazzle, amuse, and enlighten."—GambitWeekly

"This is the best book imaginable to introduce someone who doesn't think they are interested in mathematics at all to some of the deep ideas of category theory, especially if they like to bake."—MAA Reviews

"Beginning
each chapter with a recipe, Cheng converts the making of lasagna, pudding,
cookies, and other comestibles into analogies illuminating the mathematical
enterprise. Though these culinary analogies teach readers about particular
mathematical principles and processes, they ultimately point toward the
fundamental character of mathematics as a system of logic, a system presenting
daunting difficulties yet offering rare power to make life easier. Despite her
zeal for mathematical logic, Cheng recognizes that such logic begins in
faith--irrational faith--and ultimately requires poetry and art to complement
its findings. A singular humanization of the mathematical project."—Booklist, starred review

"Cheng
is exceptional at translating the abstract concepts of mathematics into
ordinary language, a strength aided by a writing style that showcases the
workings of her curious, sometimes whimsical mind. This combination allows her
to demystify how mathematicians think and work, and makes her love for
mathematics contagious."—PublishersWeekly, starred review

"What a charming and original book! The central analogy--math is like cooking--turns out to be surprisingly apt and often funny. Light and tasty, yet so, so good for you, How to Bake Pi is a real treat."—StevenStrogatz, Professor of Mathematics, Cornell University and author of TheJoy of x

"Eugenia Cheng's charming new book embeds math in a casing of wry, homespun metaphors: math is like vegan brownies, math is like a subway map, math is like a messy desk. Cheng is at home with math the way you're at home with brownies, maps, and desks, and by the end of How to Bake Pi, you might be, too."—Jordan Ellenberg, Professor of Mathematics,University of Wisconsin-Madison, and author of How Not to Be Wrong

"With this delightfully surprising book, Eugenia Cheng reveals the hidden beauty of mathematics with passion and simplicity. After reading How to Bake Pi, you won't look at math (nor porridge!) in the same way ever again."—RobertoTrotta, Astrophysicist, Imperial College London and author of The Edgeof the Sky

"Math
is a lot like cooking. We start with the ingredients we have at hand, try to
cook up something tasty, and are sometimes surprised by the results. Does this
seem odd? Maybe in school all you got was stale leftovers! Try something
better: Eugenia Cheng is not only an excellent mathematician and pastry chef,
but a great writer, too."—JohnBaez, Professor of Math at the University of California, Riverside

"From clotted cream to category theory, neither cookery nor math are what you thought they were. But deep down they're remarkably similar. A brilliant gourmet feast of what math is really about."—IanStewart, Emeritus Professor of Mathematics at the University of Warwick, andauthor of Visions of Infinity and Professor Stewart'sIncredible Numbers

"A
curious cookbook for the mathematical omnivore."—TheIrish Times (Ireland)