The Millennium Problems: The Seven Greatest Unsolved Mathematical Puzzles Of Our Time (Paperback) 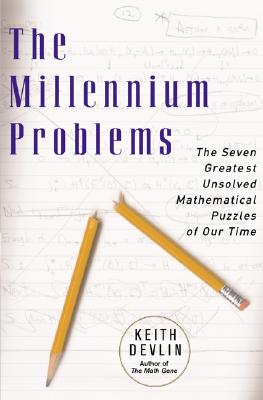 In 2000, the Clay Foundation of Cambridge, Massachusetts, announced a historic competition: whoever could solve any of seven extraordinarily difficult mathematical problems, and have the solution acknowledged as correct by the experts, would receive 1 million in prize money. There was some precedent for doing this: in 1900 David Hilbert, one of the greatest mathematicians of his day, proposed twenty-three problems, now known as the Hilbert Problems, that set much of the agenda for mathematics in the twentieth century. The Millennium Problems are likely to acquire similar stature, and their solution (or lack of one) is likely to play a strong role in determining the course of mathematics in the current century. Keith Devlin, renowned expositor of mathematics, tells here what the seven problems are, how they came about, and what they mean for math and science. These problems are the brass rings held out to today's mathematicians, glittering and just out of reach. In the hands of Keith Devlin, "the Math Guy" from NPR's "Weekend Edition," each Millennium Problem becomes a fascinating window onto the deepest and toughest questions in the field. For mathematicians, physicists, engineers, and everyone else with an interest in mathematics' cutting edge, The Millennium Problems is the definitive account of a subject that will have a very long shelf life.

Keith Devlin is a Senior Researcher and Executive Director at Stanford's Center for the Study of Language and Information, a Consulting Professor in the Department of Mathematics, and a co-founder of the Stanford Media X research network. National Public Radio's "Math Guy," he is the author of over twenty-five books. He lives in Stanford, California.