Miss Leavitt's Stars: The Untold Story of the Woman Who Discovered How to Measure the Universe (Great Discoveries) (Hardcover) 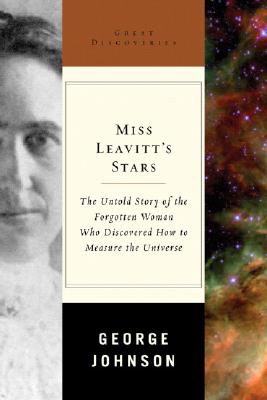 By George Johnson
Email or call for price
Out of Print

A forgotten heroine of science and how she solved one of the crucial mysteries of the universe.

How big is the universe? In the early twentieth century, scientists took sides. One held that the entire universe was contained in the Milky Way galaxy. Their champion was the strong-willed astronomer Harlow Shapley. Another camp believed that the universe was so vast that the Milky Way was just one galaxy among billions—the view that would prevail, proven by the equally headstrong Edwin Hubble.

Almost forgotten is the Harvard Observatory "computer"—a human number cruncher hired to calculate the positions and luminosities of stars in astronomical photographs—who found the key to the mystery. Radcliffe-educated Henrietta Swan Leavitt, fighting ill health and progressive deafness, stumbled upon a new law that allowed astronomers to use variable stars—those whose brightness rhythmically changes—as a cosmic yardstick. Miss Leavitt's Stars is both a masterly account of how we measure the universe and the moving story of a neglected genius

George Johnson, an award-winning science journalist, is the author of several books, most recently The Cancer Chronicles and Strange Beauty. He lives in Santa Fe, New Mexico.