Putin's Fascists: Russkii Obraz and the Politics of Managed Nationalism in Russia (Paperback) 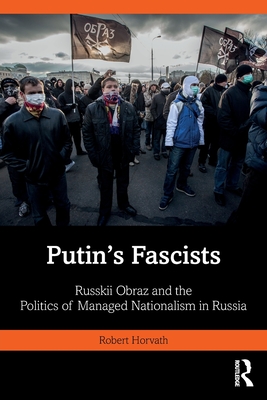 The Putin regime and its propagandists have long claimed to be fighting the heirs of Nazi Germany. From its crackdown on domestic dissent to its aggression on the international stage, the Kremlin has regularly smeared its adversaries as fascists and fascist collaborators. Russia's invasion of Ukraine, which Putin claimed would achieve its 'denazification', brought this propaganda to a new level of intensity.

This book shines a spotlight on the disturbing reality behind Putin's anti-fascist posturing. It shows how his regime mobilised neo-nazis as proxies during Russia's descent into authoritarianism. Using court records and extensive media and internet sources, it analyses the relationship between the Kremlin and Russkii Obraz, a neo-nazi organization that became a major force on Russia's radical nationalist scene in 2008-10. It shows how Russkii Obraz's rise was boosted by the regime's policy of 'managed nationalism, ' which mobilised radical nationalist proxies against opponents of authoritarianism. In return for undermining moderate nationalists and pro-democracy activists, Russkii Obraz received official support and access to public space. This collaboration became politically hazardous for the Kremlin because of Russkii Obraz's neo-Nazi ideology and its connections to BORN, a terrorist group responsible for a series of high-profile killings. When security forces captured the ringleader of BORN, they precipitated the destruction of Russkii Obraz, but veterans of the organisation went on to play a prominent role in Russia's attack on Ukraine in 2014.

Robert Horvath is a Senior Lecturer in Politics in the Department of Politics, Media and Philosophy at La Trobe University, Australia