The 99% Invisible City: A Field Guide to the Hidden World of Everyday Design (Paperback) 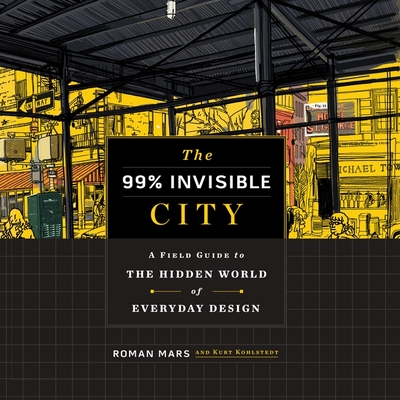 From the creators of the wildly popular 99% Invisible podcast, comes a guidebook to the unnoticed yet essential elements of our cities. Narrated by Roman Mars, with a bonus Q&A and a Full Episode of 99% Invisible.

Have you ever wondered what those bright, squiggly graffiti marks on the sidewalk mean?

Or stopped to consider why you don't see metal fire escapes on new buildings?

Or pondered the story behind those dancing inflatable figures in car dealerships?

99% Invisible is a big-ideas podcast about small-seeming things, revealing stories baked into the buildings we inhabit, the streets we drive, and the sidewalks we traverse. The show celebrates design and architecture in all of its functional glory and accidental absurdity, with intriguing tales of both designers and the people impacted by their designs.

Now, in The 99% Invisible City: A Field Guide to Hidden World of Everyday Design, host Roman Mars and coauthor Kurt Kohlstedt zoom in on the various elements that make our cities work, exploring the origins and other fascinating stories behind everything from power grids and fire escapes to drinking fountains and street signs. With deeply researched entries, The 99% Invisible City will captivate devoted fans of the show and anyone curious about design, urban environments, and the unsung marvels of the world around them.

ROMAN MARS is creator and host of 99% Invisible, the wildly popular podcast exploring architecture and design, for which he produced the most successful crowdfunding campaigns for a podcast in Kickstarter history. Fast Company named Mars one of the 100 Most Creative People in 2013 and he was a TED main stage speaker in 2015.

KURT KOHLSTEDT is the digital director and producer of 99% Invisible. Before joining the show, he founded a series of successful online magazines on cities and design, starting with WebUrbanist in 2007. He holds a graduate degree in architecture from the University of Washington’s College of Built Environments.

ROMAN MARS is creator and host of 99% Invisible, the wildly popular podcast exploring architecture and design, for which he produced the most successful crowdfunding campaigns for a podcast in Kickstarter history. Fast Company named Mars one of the 100 Most Creative People in 2013 and he was a TED main stage speaker in 2015.

“Here is a field guide, a boon, a bible, for the urban curious. Your city’s secret anatomy laid bare—a hundred things you look at but don’t see, see but don’t know. Each entry is a compact, surprising story, a thought piece, an invitation to marvel. Together, they are almost transformative. To know why things are as they are adds a satisfying richness to daily existence. This book is terrific, just terrific.” —Mary Roach, New York Times bestselling author of Gulp, Stiff, and Grunt   “The 99% Invisible City brings into view the fascinating but often unnoticed worlds we walk and drive through every day, and to read it is to feel newly alive and aware of your place in the world. This book made me laugh, and it made me cry, and it reminded me to always read the plaque.” —John Green, New York Times bestselling author of The Fault In Our Stars    “We usually define cities in terms of their bigness, so it’s easy to forget that our daily experience of any city is made up of countless tiny, intimate encounters. Just as Jane Jacobs did fifty years ago, Roman Mars and Kurt Kohlstedt provide a new way of seeing urban life, finding secrets and surprises behind every sewer grate, storefront, and street sign.” —Michael Bierut, design critic and author of How to Use Graphic Design to Sell Things, Explain Things, Make Things Look Better, Make People Laugh, Make People Cry, and (Every Once in a While) Change the World   “[The 99% INVISIBLE CITY] celebrates the functional, serendipitous, and often beautiful ways that humans have shaped their surroundings.” — Ari Shapiro, National Public Radio   “The 99% Invisible City is not a book, but a pair of magic glasses that transform the mundane city around you into a vibrant museum of human ingenuity.” —Justin McElroy, podcaster and New York Times bestselling author   “The ideal companion for city buffs, who’ll come away seeing the streets in an entirely different light.” —Kirkus Reviews, starred review   “Conversational, bite-size entries [and] beautiful tricolor illustrations . . . A field guide for anywhere.” —Booklist