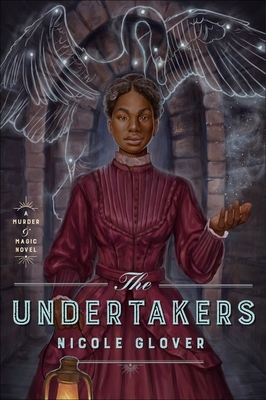 Nothing bothers Hetty and Benjy Rhodes more than a case where the answers, motives, and the murder itself feel a bit too neat. Raimond Duval, a victim of one of the many fires that have erupted recently in Philadelphia, is officially declared dead after the accident, but Hetty and Benjy’s investigation points to a powerful Fire Company known to let homes in the Black community burn to the ground. Before long, another death breathes new life into the Duval investigation: Raimond’s son, Valentine, is also found dead.

Finding themselves with the dubious honor of taking on Valentine Duval as their first major funeral, it becomes clear that his passing was intentional. Valentine and his father’s deaths are connected, and the recent fires plaguing the city might be more linked to recent community events than Hetty and Benji originally thought.

The Undertakers continues the adventures of murder and magic, where even the most powerful enchantments can’t always protect you from the ghosts of the past . . .

NICOLE GLOVER works as a UX researcher in Virginia. She believes that libraries are magical places and that problems seem smaller with a cup of tea in hand. Her life outside of books includes bicycles, video games, and baking the perfect banana bread. The Conductors is her debut novel. She can be found at nicole-glover.com.

"The Conductors is a wildly inventive alternate history that combines compelling characters, a propulsive plot, and lots of intrigue. It is also radical as hell. Thought-provoking and powerful, Glover’s novel is a must-read." — Cadwell Turnbull, author of The Lesson