The Penguin Book of Japanese Verse: From the Earliest Times to the Present (Paperback) 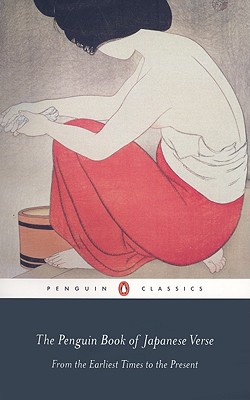 Poetry remains a living part of the culture of Japan today. The clichés of everyday speech are often to be traced to famous ancient poems, and the traditional forms of poetry are widely known and loved. The congenial attitude comes from a poetical history of about a millennium and a half. This classic collection of verse therefore contains poetry from the earliest, primitive period, through the Nara, Heian, Kamakura, Muromachi and Edo periods, ending with modern poetry from 1868 onwards, including the rising poets Tamura Ryuichi and Tanikawa Shuntaro.

For more than seventy years, Penguin has been the leading publisher of classic literature in the English-speaking world. With more than 1,700 titles, Penguin Classics represents a global bookshelf of the best works throughout history and across genres and disciplines. Readers trust the series to provide authoritative texts enhanced by introductions and notes by distinguished scholars and contemporary authors, as well as up-to-date translations by award-winning translators.

Geoffrey Bownas was born in 1923; he read Greats and Chinese at Oxford and in 1952-4 studied with Professor Kaizuka Shigeki in Kyoto University. He established Oxford's Department of Japanese Studies in 1954, then became Sheffield University's Founding Professor of Japanese Studies in 1966, pioneering the combination of the study of Japanese with social sciences. His publications include Japanese Rainmaking and Other Folk Practices, New Writing in Japan with Mishima Yukio, Doing Business with the Japanese with David Powers and Christopher Hood and Japanese Journeys, Writings and Recolllections of a half century of direct involvement with Japan.

Anthony Thwaite was born in 1930. After leaving Oxford in 1955 he went to Tokyo University where he taught English Literature until 1957. He has frequently revisited Japan, holding a Japan Foundation Fellowship in 1985-6, taking up a travelling scholarship in 1989, and going to Japan on various lectures and tours over the years, most recently in 2005. He has taught in Universities in Britain, the U.S.A., Libya and elsewhere. He has published seventeen books of poems, most recently Collected Poems (2007), holds honorary doctorates from the Universities of Hull and East Anglia, and was awarded an OBE for services to poetry in 1990.