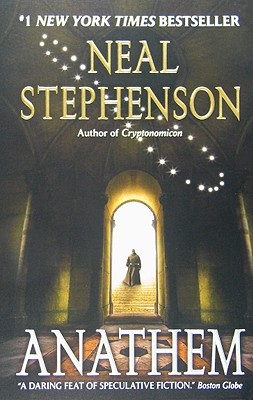 By Neal Stephenson
$9.99
Email or call for price.

A #1 New York Times Bestseller, Anathem is perhaps the most brilliant literary invention to date from the incomparable Neal Stephenson, who rocked the world with Snow Crash, Cryptonomicon, and The Baroque Cycle. Now he imagines an alternate universe where scientists, philosophers, and mathematicians live in seclusion behind ancient monastery walls until they are called back into the world to deal with a crisis of astronomical proportions.

Neal Stephenson is the bestselling author of the novels Reamde, Anathem, The System of the World, The Confusion, Quicksilver, Cryptonomicon, The Diamond Age, Snow Crash, and Zodiac, and the groundbreaking nonfiction work In the Beginning . . . Was the Command Line. He lives in Seattle, Washington.

“Reading Anathem is a humbling experience.”
— Washington Post on ANATHEM

“A sprawling disquisition…[a] logophilic treat for those who like their alternate worlds big, parodic and ironic.”
— Kirkus Reviews on ANATHEM

“Stephenson’s expansive storytelling echoes Walter Miller’s classic A Canticle for Leibowitz, the space operas of Larry Niven and the cultural meditations of Douglas Hofstadter – a heady mix of antecedents that makes for long stretches of dazzling entertainment.”
— Publishers Weekly on ANATHEM

“A masterpiece...mind-bogglingly ambitious...readers will delight in puzzling out the historical antecedents in philosophy, science, mathematics, and art that Stephenson riffs on with his customary quicklsilver genius...it’s one of the most thought-provoking novels I’ve ever read, and also one of the most engaging.”
— Locus, Paul Witcover, on ANATHEM

“The Seattle writer is kind of a cross between William Gibson and Richard Powers, hard-wired to tell stories, explore technology and riff on anything that catches his fancy.”
— The Oregonian (Portland) on ANATHEM

“What ever happened to the great novel of ideas? It has morphed into science fiction, and Stephenson is its foremost practitioner. A-”
— Time magazine on ANATHEM