Her Own Rules (Mass Market) 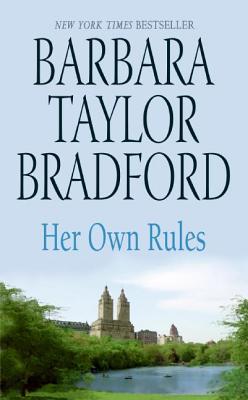 By Barbara Taylor Bradford
$7.99
Email or call for price.

Meredith Stratton worked hard to become a successful businesswoman—and now she owns six elegant inns all over the world. But on a trip abroad she is struck by a strange illness, one that seems to have no physical cause. Meredith has always played by her own rules—and won—and now she must uncover the roots of this mystery ailment that threatens her future happiness. The answers lie buried somewhere in her forgotten past. And with the help of a caring psychiatrist, Meredith will have to peel back the layers of her most carefully designed and constructed creation: herself.

Barbara Taylor Bradford was born in Leeds, Yorkshire, and was a reporter for the Yorkshire Evening Post at sixteen. By the age of twenty she had graduated to London's Fleet Street as both an editor and columnist.

In 1979, she wrote her first novel, A Woman of Substance, and that enduring bestseller was followed by 12 others: Voice of the Heart, Hold the Dream, Act of Will, To Be the Best, The Women in His Life, Remember, Angel, Everything to Gain, Dangerous to Know, Love in Another Town, Her Own Rules and A Secret Affair.

Of these titles, ten have been made into television miniseries or are currently in production. Her novels have sold more than 56 million copies worldwide in more than 88 countries and 38 languages. Barbara Taylor Bradford lives in New York City and Connecticut with her husband, film producer Robert Bradford.